Benefits of Activator Poles compared to the use (or in conjunction with) of Canes, Crutches and Walkers

Is there a more effective alternative to traditional passive devices such as canes, crutches and walkers for rehabilitation? The case for the ACTIVATOR™ Poles.

Specialized walking poles called Activator Poles are being internationally recognized as revolutionizing rehabilitation practices. The evidence-based Poles are being prescribed as a highly effective alternative (or in conjunction) to traditional passive devices such as canes and to reduce/delay the use of crutches and walkers (when appropriate) to improve outcomes for balance, core strengthening, off-loading and normalizing walking patterns.

Patients are also praising the Activator Poles for promoting the concept of Ability vs Disability associated with canes, crutches and walkers. Developed by a Canadian therapist, Mandy Shintani BSc (OT), MA (Gero), the Activator Poles have been the focus of presentations at the International 200 Years of Parkinson’s Disease conference, National Fall Prevention Conference and last month at the International Stroke Congress. They are prescribed in neurology, orthopedics, geriatrics, spinal conditions, pediatrics across Canada and now internationally.

“For the past 5 years I have consistently recommended the Activator poles for patients… they have been especially helpful for spinal stenosis patients who have undergone surgical decompression…. They have been instrumental in promoting an upright posture and a functional walking pattern compared to canes and walkers. In my opinion they facilitate rehabilitation and return patients to optimal function faster.” Dr. Charles G. Fisher MD MHSc FRCSC, Surgeon, Past President of the Canadian Spine Society

These photos below highlight some of the challenges associated with cane use with the stroke population including; trunk rotation, hip hiking, no arm swing of the affected arm, leaning to one side and limited weight-bearing on the affected leg (picture on left side). Canes provide a visual, proprioceptive and sensory cueing to the normal side however, rehabilitation modalities should be focusing the patient’s attention to the affected side. In comparison, Activator Poles promote bilateral cueing to the affected arm and leg, greater arm swing, weight bearing on the affected leg, upright posture and truck facing forward. The technique of using walking poles mimic the same pattern as normal walking, opposite arm and leg movement. 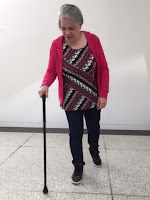 In 2005, Mandy Shintani discovered the concept of Nordic walking poles from her Swedish neighbour who indicated that the activity was very popular in Scandinavia by people of all ages and fitness levels. Recognizing that walking poles would be effective for the key goals of rehabilitation, she re-engineered the Activator Poles with design features for increase safety and stability for rehabilitation clients. They are backed by 8 recent/current research studies on reducing the risk of falls, balance, mobility, off loading on the knee joints and posture at the renowned Royal National Orthopedic Hospitals in the UK. Wendy Walker, UK neurological therapist comments on the patented Core Grip design which was developed for engaging core strengthening with each step, off loading and weight bearing for balance. The handle was designed without straps which are related to the highest rate of injury according to a German study by Knobloch et. al., 2006.

“The Activator poles have a unique hand-grip which enables the user to stabilize their arm through the lateral border of the hand, thus providing a little more stability than standard walking poles as well as promoting a more neutral wrist posture.” UK neurological therapist Wendy Walker, Physiopedia, Dec 2016

While therapists initially prescribed ACTIVATOR Poles for gait retraining and mobility in Canada, they are now utilized extensively for innovative seated, standing and pre-gait exercises, with many of these exercises now found on the PT-Helper App. The Poles provide the same benefits for exercise including; promoting an upright posture, allowing greater ROM with bilateral support, sensory and visual cueing to the affected side. Core strengthening can be activated by applying a downward pressure on the ledge of the CoreGrip while exercising. Here are some sample exercises below. 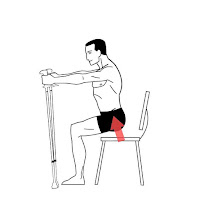 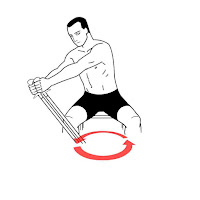 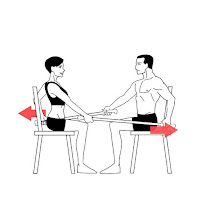 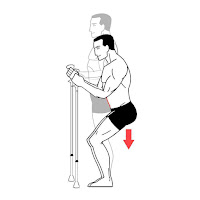 *one coupon code per rehab professional. Available until December 31, 2018.

Start your Free 30-day Trial of the PT-Helper CONNECT service for physical therapists and other wellness professional, to prescribe Home Exercise Programs.

Download the PT-Helper mobile app for patients and exercise enthusiasts to create your exercise program.